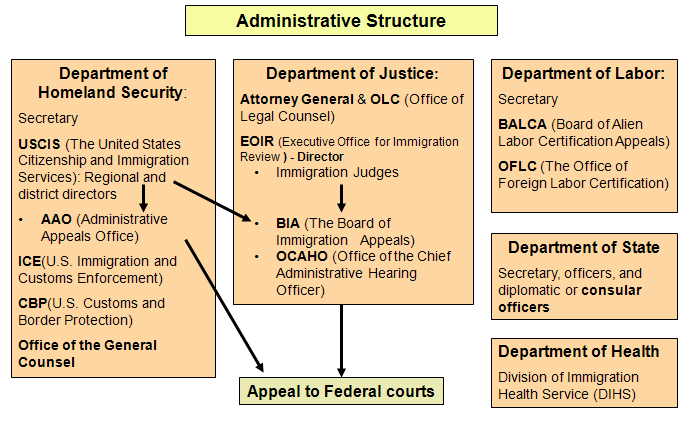 ·         The highest administrative body for interpreting and applying immigration laws. BIA is the appellate body designed to review decisions from the immigration court and, in some instances, from DHS (Coverage of appellate review is enumerated at §1003.1(b)). The BIA is part of EOIR, which is within the U.S. Department of Justice.  It is composed of 15 Board Members, the Attorney General's delegates, including the Chairman and a Vice Chairman who share responsibilities for Board management.

·         The Board has been given nationwide jurisdiction to hear appeals from certain decisions rendered by Immigration Judges and by District Directors of the Department of Homeland Security (DHS) in a wide variety of proceedings in which the Government of the United States is one party and the other party is either an alien, a citizen, or a business firm.  Decisions of the Board are binding on all DHS officers and Immigration Judges unless modified or overruled by the Attorney General or a Federal court.  All board decisions are subject to judicial review in Federal Court.  And selected decisions of the Board may be designated to serve as precedents and published in Administrative Decisions Under Immigration and nationality Laws (I. & N. Dec.)

·         In addition, the Board is responsible for the recognition of organizations and accreditation of representatives requesting permission to practice before DHS, the Immigration Courts, and the Board.  It also issues operation instructions and policy.

·         The Office of the Chief Administrative Hearing Officer (OCAHO) was established in March, 1987, as an additional unit within the Executive Office for Immigration Review (EOIR). OCAHO is responsible for administering the hearing process issues arising under the unlawful employment of aliens, civil document fraud, and antidiscrimination provisions of the Immigration Reform and Control Act of 1986 (IRCA) and the Immigration Act of 1990 (IMMACT).

·         The Attorney General has directed the Office of Legal Counsel to publish selected opinions for the convenience of the executive, legislative, and judicial branches of the government, and of the professional bar and the general public. The authority of the Office of Legal Counsel to render legal opinions is derived from the authority of the Attorney General.

Ø  Office of the General Council (GCO)

·         The Office of the General Counsel issues decisions providing guidance to immigration officers. The legal opinions had been issued for many years but were not readily available. Less than 2 percent of opinions were published. With the abolishment of the INS, pursuant to the Homeland Security Act of 2002, the Office of General Counsel was created within the Department of Homeland Security.

·         U.S. Citizenship and Immigration Services (USCIS) is responsible for the administration of immigration and naturalization adjudication functions. The government agency oversees lawful immigration to the United States. On March 1, 2003, USCIS officially assumed responsibility for the immigration service functions of the federal government. The Homeland Security Act of 2002 (Pub. L. No. 107–296, 116 Stat. 2135) dismantled the former Immigration and Naturalization Service (INS) and separated the former agency into three components within the Department of Homeland Security (DHS).

·         It was called the Administrative Appeals Unit (AAU) until 1994, when the INS changed its name as part of an internal reorganization. AAO has jurisdiction under 8 C.F.R. §§ 103.3(a)(1)(ii), 1103.3(a)(1)(ii), AFM at 3.5(c). District directors and directors of service centers have primary authority to grant or deny a wide variety of formal applications or petitions. In most cases an appeal from the district director's or regional service center's ruling may be taken to the Administrative Appeals Office (AAO). Unlike the BIA, the AAO reviews all cases do novo and therefore is not restricted to the original record. It will accept and consider any documents or other evidence submitted by the appellant.

·         Immigration enforcement including SEVIS. ICE is the largest investigative arm of DHS.

·         An official source of information about United States (U.S.) visa policy and procedures. We hope you’ll use this office to learn about different types of U.S. visas, the application process, and to better understand the requirements you need to meet in order to receive your visa.

Department of Health and Human Service

·         The United States Public Health Service appoint officers who shall make the physical and mental examination of arriving aliens (including alien crewmen) and conduct all medical examinations and shall certify, for the information of the immigration officers and the immigration judges, any physical and mental defect or disease observed by such medical officers in any such alien. INA § 232(b) (8 U.S.C. § 1222). Also look at 42 C.F.R. pt. 34 to see medical examinations of aliens in detail.

The Department of Labor is responsible for determining labor certification applications through the Office of Foreign Labor Certification under the Employment and Training Administration(ETA) (20 C.F.R. Pt. 656 Subpart C).

·         OFLC under ETA is organized around a national office in Washington, DC, supported by two National Processing Centers in Atlanta and Chicago.

Ø  The Board of Alien Labor Certification Appeals (BALCA)

·         Generally, application denials are reviewed by a panel of three judges. En banc review may be granted, at the request of the Chief Judge or by petition of a party. The decisions of BALCA have no precedential value but are used as guides for the Department of Labor in interpreting other labor certifications.